As told by her mum T’Lise –

Aniyah’s first Milestone Group session was in October 2019 when she was 1 year old, after finding out about NICE through a cerebral palsy Facebook group. Aniyah’s cerebral palsy was caused by a traumatic birth where she suffered a HIE event (oxygen deprivation to the brain) which caused brain damage.

Having had such a terrible year, discovering NICE was that glimpse of hope we needed. I felt from the beginning they believed in Aniyah just as much as I did. We’d had very little medical support by this point — no diagnosis, no physiotherapy, no Health Visitor. I knew as her mother she had cerebral palsy from watching her develop, it was just a case of getting someone to listen. Then we found NICE.

I knew straight away, walking into the building that this was exactly what she needed, what we needed. It’s bright and cheerful and everyone is so friendly.

During her consultation Aniyah struggled, not having left my arms since being discharged from intensive care plus the added isolation of the pandemic we developed such a strong bond. So there were tears, but followed by laughing, singing and quiet listening.

I’ll never forget the moment when the Conductors Lucy and Megan got Aniyah into a four-point kneeling position to encourage crawling.

Aniyah was not coping with the new environment and people, and was crying hysterically and reaching out for me when Lucy and Megan broke out into song, singing:

“I’m Aniyah and this is how I crawl”

Immediately Aniyah stopped crying and stared, intrigued as to what was happening. I don’t know why, but it felt like a breakthrough. I couldn’t control my tears, the singing was moving and to this day it remains one of my favourite things we practice.

Initially, Aniyah struggled with the physical elements of the class. She had only reached one of her milestones which was rolling. She was not sitting independently, standing, walking or talking. Her dystonia and asymmetrical tonic neck reflex (ATNR) made it so difficult for her to complete small tasks, for example, picking up a shape off the table. But she shone when it came to listening and following instructions.

The use of Makaton during her classes also helped Aniyah to understand and to express herself. She would nod or shake her head to answer questions. Megan and Erika worked with Aniyah and built her confidence, showing her what she was capable of and not long into the sessions, Aniyah’s physical ability grew, along with her strength.

Family and friends were commenting on the improvement in her coordination, or ability to point to the colour or toy you asked her to. It was probably around a term into joining NICE when Aniyah’s speech flourished. She was starting to name colours and use words like more, up, please, no and Mom. She began to sign and say the colour red simultaneously. Again, this was yet another breakthrough moment.

“In such a short space of time we got to see just what the Milestone Group had to offer us… a chance.”

This last year Aniyah has achieved so much. She can crawl, she can stand AND walk using a ladder with assistance. She can hold cutlery and attempts to feed herself. Her posture has improved and she is also very good at correcting herself when needed. I now have a confident, VERY determined sassy 2 year old. I believe that wouldn’t be the case without NICE.

Aniyah has the habit of wanting to join in with activities set for other children in her class that are a little bit too hard for her at the moment but Megan and Erika never discourage her and allow her to join and complete it as best as Aniyah can. I believe this motivates Aniyah and shows her what her next goal is to aim for.

I have documented our NICE journey on social media and it is amazing to see the difference in her in such a short space of time. I have found taking photos and videos really helps to visualise her progress. It’s lovely when the other parents notice in her class. We can all spot growth in each other’s children and we’ve built genuine friendships. Our milestone group has remained consistent throughout the pandemic. We’re all one big happy family.

Thank you NICE, we are so grateful for what you’ve given us. 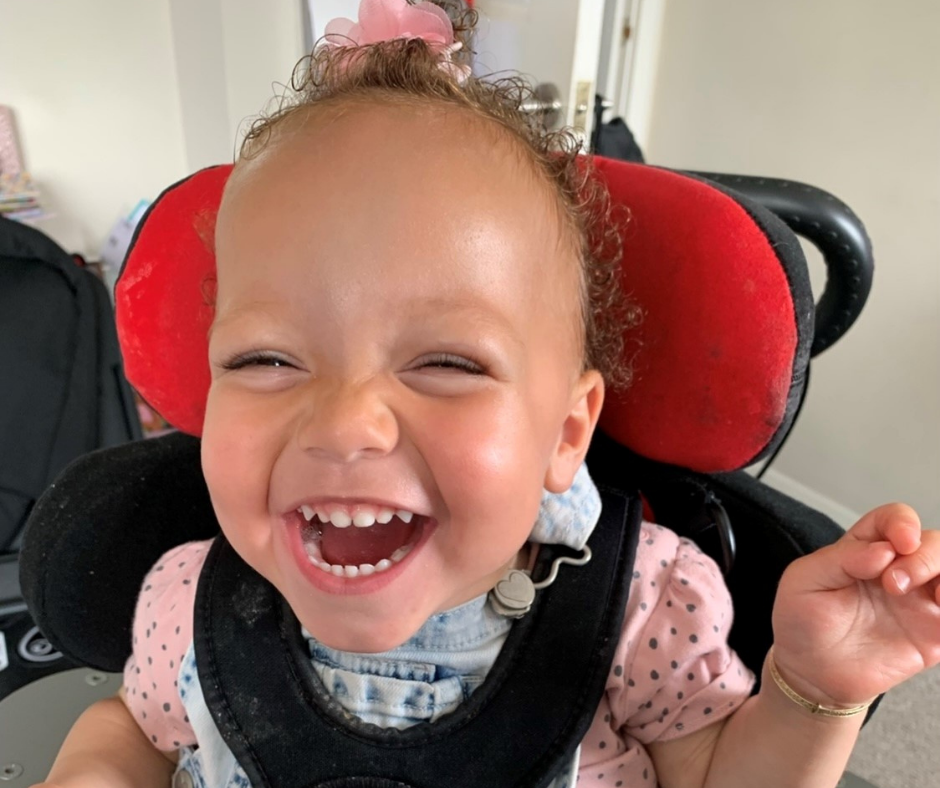