Hello, my name is Elaine and I have lived with Primary Progressive MS for over 30 years, fortunately it has progressed very slowly.

I started attending Conductive Education sessions in 1997. In those days new people started with a week of 5 half-day sessions and then went on to regular sessions every few weeks or so depending on what was felt to be appropriate. As I worked nearby I could fit these sessions in without too much disruption to my work. However I hadn’t yet told my family what I was doing. About a week later I was out with my daughter and asked her if she had noticed anything different about me. She said “you are walking better”. I know it doesn’t work that quickly for most people but it made me determined to carry on with the sessions and they helped me to preserve my mobility for many years.

Over the years as the MS has progressed, the conductors have helped me with new problems and often to find a way round them. This was particularly true when I had to take early retirement from a job which I loved due to increasing MS problems. The conductors were there for me and it was also good to speak to others in my session group who understood my problems and had been through similar problems.

In 2008 I was co-opted to the Trustees Board to represent the adult department. This gave me a better understanding of the way the charity is run and any financial problems which occurred from time to time. I was also make able to make some input to decisions affecting the adult department from mine and other people’s experiences. It was an opportunity to give something back to NICE which had done so much for me.

Earlier this year I received an email from Annie in Fundraising about the fact that the London Marathon had been cancelled this year because of Covid-19 and how charities, including NICE, were helped by the money raised in sponsorship. She informed me about the ‘26 or 2.6’ challenge which many charities, including NICE, depended on to raise money to replace this. 2.6 was chosen because a marathon is 26 miles. Also many of their fundraising plans had to be cancelled.

Inspired, like many people, by Colonel Tom, and being aware due to my work as a trustee, how much income NICE was losing because all the face-to-face adult sessions had to be cancelled, as everyone attending them was classed as a vulnerable person because of their condition, I felt I would like to set myself a challenge to raise some donations. Stair climbing is a challenge to me as I normally use a stair lift and being aware that I didn’t have to do it all in one day but could spread it over several days, 26 climbs up and down the stairs seemed to be a good challenge. After the decision was made everything started to fall into place. Climbing stairs meant that I wouldn’t have to leave the house during lockdown. My daughter, who had run the Birmingham Marathon for NICE 2 years ago, helped me to set up a Just Giving page, and I emailed all my friends and people who I thought might be willing to donate.

By this time it was 2 days before my challenge on April 26 and I counted how many steps were on my stairs – 13, so by going up and down it was 26 steps! Everything fell into place!

I did the challenge in sessions and completed it in a couple of days. People were very generous with their donations. I set a target of £260 and with Gift Aid raised £520.

I would also like to mention how helpful the conductors at NICE have been during the pandemic. As I mentioned, all the usual sessions at NICE had to pause but we have been having half-hour sessions three times a week on Zoom, a new concept to most of us but we have settled into it quite well. It keeps us fit, reminds us of what we should be doing and keeps us in contact with the rest of our group, even though we can’t leave the house. 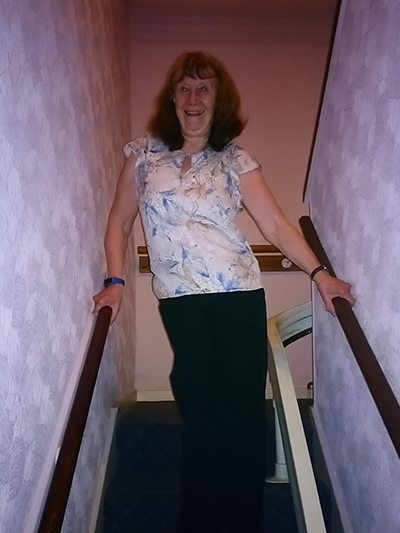